A productive few days off with some corrugated colourbond getting heaved into position as 'lockup' gets a little closer.
Chief Construction Engineer Hardie (looking more like an Italian fisherman on this occasion!) 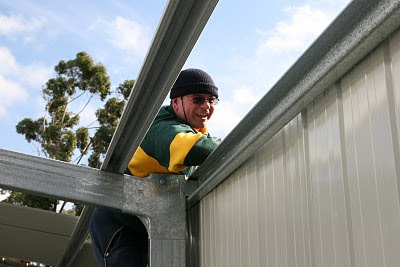 rolled up for another stint and we discovered why there are people who do this for a living and the importance 'checking for square' when building anything.
I thought that I had been pretty vigilant in this regard, checking, adjusting, checking again etc etc. Frames went up ok, walls went up ok, roof went on ok...nah! I knew the slab was square but something went awry in the framing stage I think, as when the roof sheets were were set atop the frames and lined up with the end wall they were not square to the side walls, 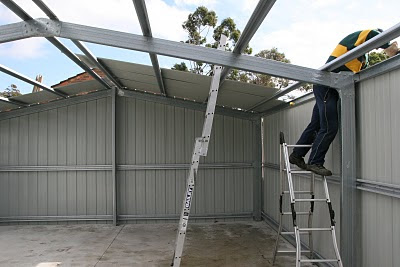 the disturbing part was that it was more pronounced on one half of the roof than the other!...go figure.
After a frustrating hour or so trying to work out what was going on, it ended up being a case of 'put and look' with each roof sheet and trying to get each sheet progressively back into square. The side wall is more critical than the end wall as the relationship between the guttering and the ends of the sheets is pretty important to get rid of storm water into the guttering rather than over it!
It took about 3 hours to get 8 sheets up (not quite half the roof) and secured in place, and about 10 minutes to silicon up the holes where the tek screws missed the roof girts completely after sheets were re aligned.

At the end of the day I offered a prayer of thanks....for gable flashing, as it will certainly cover a multitude of sins.

The saga of 3265 came to an end with the addition of a crew and some coal and will be delivered to it's new, and very patient, owner shortly.
Many lessons learned from this project. Whilst I am a proponent of DCC it really does cause a 'raising of the bar' when building locomotives. I suppose I have built around 30 or so white metal loco's but this was the first to have DCC and sound fitted. The lack of 'electrical tolerance' of DCC decoders and more so when sound is involved, will cause this builder to refine assembly methods and be more vigilant of potential electrical problems during construction rather than trying to fix them afterwards. I have described 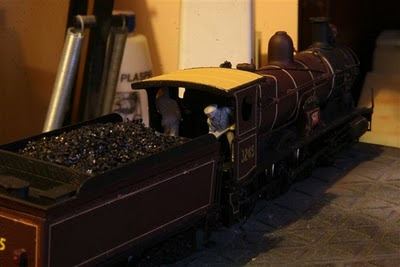 these kits as "rolling short circuits" before and this project has shown this to be even truer on this occasion. I have at least another dozen of these kits in storage, with a few more on the list. It was my intention to sound equip them all as I eventually build them, and probably still will, but with some trepidation as I tune my 'DCC sense' to spot problems as they become apparent. 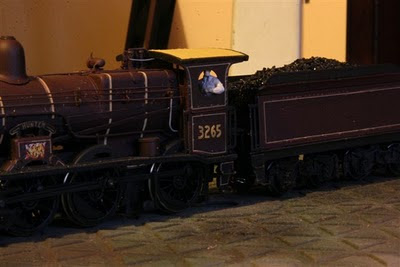 Some pics of 2606 are included, not built by me but required some attention and a dusting up for that 'in service' look. The side and connecting rods had been left silver and the paint work was 'as delivered'. A coat of black metal etch on the rods followed by a light coat of TLB 'Grotty Black' all over and some weathering using Humbrol Brown 113 and a little gray primer. Finished off with Testors Dulcote, which also masked the edges of the number decals somewhat as well. 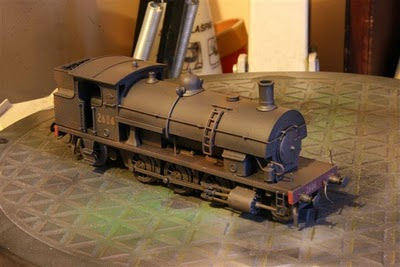 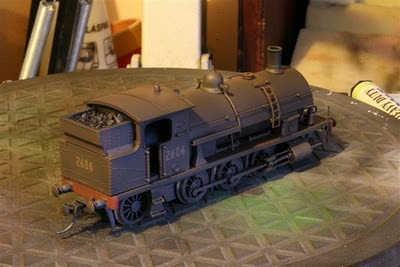