I was given 4 of these to build for a work colleague so I thought I would jot down a few words and pics for those contemplating building these kits.

The MLV is a 36' louvre van of 24 ton capacity and a 'fish belly' type underframe, which was built by Tullochs during 1957-58 (so it fits my era perfectly) and were all gone by the early 80's. Originally fitted with a dual skin corrugated steel roof, for insulation from the heat of the sun, the model is as it appeared later in life with a smooth roof and comes with either 2CF or 2AP bogies.

The main castings, all 2 of them, make assembly of this kit straight forward. Roof, sides and ends are a single casting and the other is the underframe, with some underfloor detail cast in. These castings are straight and flat, always a good thing, and required minimal 'flash' removal. Close inspection of the actual louvres reveals a few inconsistencies but in this case, I regard this as a good thing. They are not perfect, just like the real thing after a few years in service. Some of the metal body fittings, straps and other brackets, do lack the 'crispness' that depicts them as a separate component but are still pretty good.

The casting material is polyurethane and this includes a separate brake lever casting. I would have preferred to see this casting done in brass with the brake cylinder, which is readily available from other detail parts manufacturers, as most of the detail is lost in the poly. One of the kits contained a brake lever casting which appeared to be cast from a different material to the others and the detail was much better than the grey poly version. Other detail components include brake hoses (lost wax casting), hand brake spiders (etch brass) and a few lengths of 0.4 mm brass wire. One of the four kits I had also included preformed shunters steps in flat strap 'brass', the other three kits did not. I contacted IDR and he advised that he had run out, hence the extra wire to 'dyo' steps. These were an A-Line product sourced from Walthers and may be included in future kits, they made a nice touch and were certainly easier and better looking than the alternative. The Model Etch equivalent is also an alternative to brass wire. KD whisker couplings, AR bogies with blackened wheel sets and a quantity of screws for fitting both are supplied, along with a pre numbered decal sheet. I'm not sure how many number variations are available, but all 4 of mine were different numbers. The decals also include 'A' and 'B' door decals, as well as a decal to represent the cast departmental number plate as well, the decals are very nicely done, crisp in detail and easy to apply.

If your kit does not come with the pre formed steps, you had better like bending wire ! There a 8 hand rails, 6 shunter steps, 4 lamp brackets , 4 brake rigging hoops and 2 brake pull rods to bend up and fit. Also a hand brake axle, hand brake release axle and aux reservoir drain handle to fabricate and fit. There is a grade control handle cast into each side as well, but fitting an actuating rod to this would have obliterated the detail of the casting. The brake cylinder, dummy brake cylinder and aux reservoir are cast into the floor, as well as the the brake pipe itself.

Assembly involves gluing the floor and body together and adding the detail, did I mention bending some wire !?? I used a slow setting 'super glue' (Delta brand from HobbyCo) and had no problems with the fit in any of the kits.

Painting is the standard affair, wash, prime, paint (your favorite shade of black), decal and make dirty ! Bogies and couplers are fitted with the screws supplied. The first one I completed went straight to the owner so it could be used on the Maitland Clubs layout for Steamfest 11, so I didn't get time to photograph it, but I will include some pics as the others are completed. 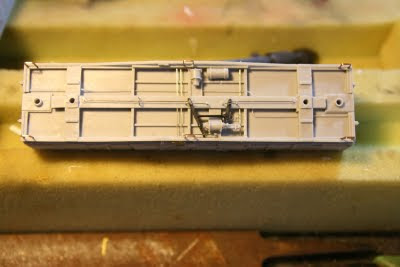 Underframe with detail added. This shows the 'one off' brake lever casting in black which was much better than the other three. 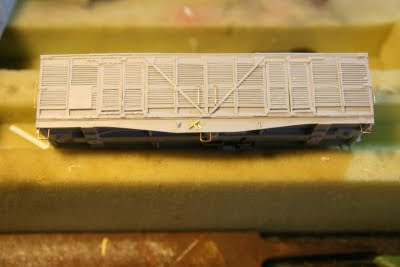 Side view showing shunters steps (the preformed ones from A-Line), handrails etc. 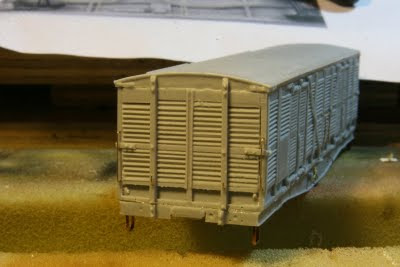 
Would I buy some for my collection ? Yep. Not the cheapest kit at $50 each, but nothing else to buy apart from the paint and glue. A lot of work has gone into the masters and molds and it is a very good representation of an MLV. Available from Micro Models Hobbyland at Hornsby.
Posted by Gary Laker at 15:35