My first modeling efforts for the new year involved an attempt to progress a little further with 3265 and try to clear a few unfinished project off the bench.

This UME (MLE) is an AR Kits model with a Sydney Hobbies log load chained to the deck, although the detail hounds will notice that the logs are not actually chained to anything! The UME kit has , and still is, been around for yonkers. Whilst not having the detail of the the latest Austrains offering, or the price tag and weight, it is the basis of a fairly accurate model. With some added detail parts it comes up very nicely. I have not given this one the detail treatment as is was more a loading exercise. 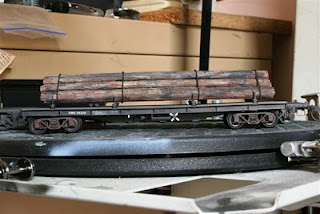 The SH log load comes as an unpainted one piece resin casting. First thing is a good scrub with warm soapy water and let dry. A coat of your favorite self etch primer, Bakers in this case, followed by a base coat of whatever med brown you have in stock. I used a 20 year old tin of Humbrol, gotta love that lead, lasts for ever ever and I never had the urge to drink it once ! Follow on by brushing two or three other shades of whatever browns you have and finish off by streaking on some black here and there. Use the dry brushing method on all but the first coat so as not to ply on too thick. I did a second one of these and had to do a bit of work with the back of a knife blade to get some definition in the grain detail so there is some variation from casting to casting. You can also run a fine black line with a thin brush where the logs join together so they appear to be separate logs and not a mass. The chain is from Model Builders and is 40 links to the inch. Cut to length and secured under the logs with a dab of CA. I secured the load to the wagon using PVA on top of the stanchions so it will be easy to remove if needed. The whole thing is then given a good going over with Testors Dulcote to cover the little indiscretions. 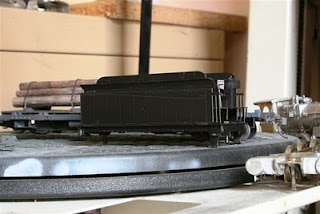 Here is the tender for 3265, minus the sound equipment, with its first coat of paint. Mirotone satin black metal primer. Next will be the maroon on the tender sides. 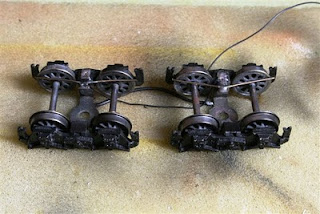 Tender bogies for 3265 with the second set of phosphor bronze pickups added. A small piece of PC board was glued wit CA to the bogie spreader then the pickups were formed and soldered to the PC board. Fine wire was then soldered to the PC board for electrical connection and the pickups adjusted by judiciously bending them away from the wheel tyres till they just touch. Too much pressure and the wheel sets will not turn properly. 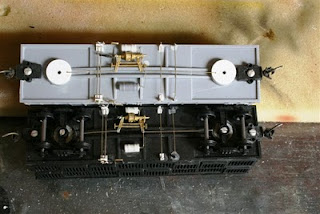 Some Bergs BCW and BSV wagons, 2 of each, I purchased from a deceased estate already assembled. I have added brake detail from a number of sources including Ozzy Models, Silvermaz and some scratch building. Full brake gear, including the handbrake chain and release rods, and grade control equipment has been depicted. These have since had a coat of primer but the detail stands out better for the pic beforehand. These four wagons will finish off my stock train of bogie and four wheelers.
Posted by Gary Laker at 18:22