....have been greatly exaggerated !
But if you were to judge this by my activity on this blog of late, 7 months to be precise, you could not be blamed for thinking otherwise !

Whilst activity here has been very quiet, I think I have set a new PB for inactivity, elsewhere it has been all go. In a big push to finally get the cave completed to a point where I could make a start on the layout I engaged the services of a gyprocker to line the cave and make it habitable for as much of the year as possible. In hindsight this was a very good move. I went through the quoting process and it was actually Boral themselves who gave me the best price with a job time of two to three days and then ready to paint.

Three days in and the sub contractors were inventing some new words to describe both the guy that quoted and my cave as well ! While walls and ceiling were well within the norm for being a "bit" out of square, it was the beams that had to be boxed in that caused the most grief for them. The 'quoter' had also only allowed for 'square set' edges (no cornice) but the subbies said this was not going to work and I would have problems with cracking later on due to the metal shed expanding and contracting in the temp changes. So Boral coughed up for the cornice, supplied and installed, for free ! Thank you very much indeed and Im more than happy with the job they did. Ivé since had several offers from people wanting to move in, not believing that this 'shed' is to become my playroom ! I suppose having carpet, an air conditioner and LCD hanging off the wall may have swayed them a bit to !!

﻿
﻿
I also made a start on the benchwork for the storage level and this is nearly completed. This also incorporates 4 traverser type yards and once I get to the wiring of these yards, which will incorporate around 36 micro switches, progress will slow. As I'm sure I have mentioned in other posts, despite being in the hobby for over 3 decades Ive only built one layout, which Mum made me dismantle because she couldnt get to the bed anymore, which was built from Hornby set track from the Hornby track plans book from 1980 or 81. Apart from this attempt I've never laid a length of track. Despite this I am most fortunate to be a part of a group which comprises a truly awsome model railway "brains trust" which I will draw on heavily over the coming years. Although not a club in the true sense, it is from this experience that I can see the real value in belonging to a club or group and having access and exposure to so many varied skills, knowledge and experience. 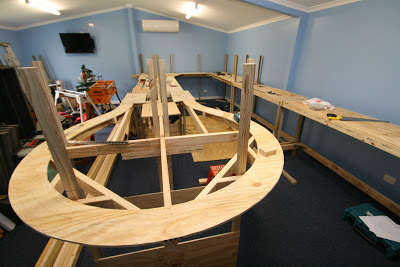 View from east end showing showing loop storage and through road. Two traverser decks can be seen on the right.
﻿﻿﻿﻿
﻿﻿
﻿ 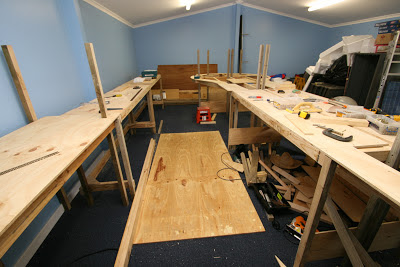 View from west end. Two more traverser decks on right.
As you can see I have gone with the tradional blue walls and white ceiling colour scheme. There is a total of 8 double and 3 quad power points spread around the room. It is lit by four double tri phospher fluro's.
Another example of "brave new world" syndrome was the purchase of a FastTracks jig from Gwydir Valley. With around 150 sets of points with the current track plan for Cambewarra this was a financial decision as well as just wanting to have a go ! 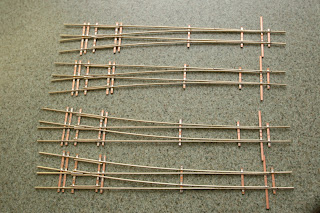 Here are the fruits of my labor so far. Have done six sets so far and have it down to about 1 hour per set not including the timber sleepers.
Thats about where I'm at so far. Still have a few jobs on the bench which may rate a post later on. Preps for the convention are well and truly underway and, as always, we are on the lookout for presenters and demonstrators. Date is yet to be finalised but towards the end of June is looking like a possibility at this stage.