Those of you that follow Rod Kelly's blog , NSWGR Southern Line in a Shed, will know that he has resurrected his Laser Rail Bits line of detail/structure kits. After an absence of 7 years from the market, their return marks, in my opinion, a swing, or trend if you like, in the hobby in general.

It's no secret that, in the rolling stock area, modellers of NSW outline (and other states) have never had it so good as far as choice, detail and quality go. Some 'labels' have even drawn criticism for including too much detail on their models, citing their fragility as making them impractical for use on 'working' layouts and an alternative identical model with less detail should be offered, of lesser cost of course. The reality here is that the number of detail items inculded on a model makes very little, if any at all, difference to the shelf price of a a singular model.

While some may lament this as the 'the end of the kit as we know it' era, something that would initiate active debate between those of either opinion, I see it as the start, or  restart, of the emphasis on detail(s) of the layout, both home and club, as well as exhibition.

Over the couple of decades that I have been attending exhibitions the emphasis has, generally, been on the models rolling through the varied landscapes. There are of course exceptions to this and some individuals and groups raised the bar to to new levels in both aspects. While the standard in rolling stock remains high in the majority of cases, it is the quality of scenery and the detail which has been making steady upward progress over the last few years. It was with this in mind that myself, when I recently became aware of it when I discovered his blog, and others, have encouraged Rod to start (again) manufacturing his range of laser cut/etched timber detailing parts.

Rod sent me a selection of level crossing kits which covers what amounts to single lane and dual lane crossings in either brand new or reclaimed sleepers. The outline appears indentical, apart from the size of course, but the etching detail is what creates the difference between new and reclaimed. The etching detail is what is the standout for me. In the reclaimed version the outline of sleeper plate wear and spike hole is quite evident and even after I applied 'distressing' with a #11 blade and stained the crossing using a Tamiya wash of grey and then black, was still quite visible. One thing which initially caused me some 'distress' was after applying the weathering wash the entire crossing curled up, almost resembling a dried out hotdog bun ! Well that's interesting, I thought, however applying a small amount of Tamiya thinners to the opposite side soon encouraged the crossing to flaten out again and it stayed that way, thankfully! It may well have flattend out by itself, in time, working with timber this thin is something new to me.

The pic show the crossing installed, very quickly, at Kankool Perway depot on Werris Ck. The other crossing was done using timber 'sleepers' from a different manufacturer. As you can see they are a tad overscale and don't produce the same result as the Laser Bits crossing. Installation was simply a few drops of PVA on the back of each component and place, followed by 'backfilling' with fine ballast and dirt. The distressing and weathering (staining) took about 15 minutes. Do this a little at a time as 'unstaining' basswood is an art that I'm yet to master !

With any of the Laser Rail Kits accuracy is paramount. Rod researches everything he does, in person where humanly possible. Most of all he is after feedback, good, bad or otherwise, and ideas from modellers for future projects. He has some great stuff in the pipeline and all it will take is some support from the modelling community (and enough hours in the day and a reliable source of suitable timber) for these projects to become a reality.


Have a look at Rods blog for more pics and info on planned kits and check out his Ebay store for whats available now. 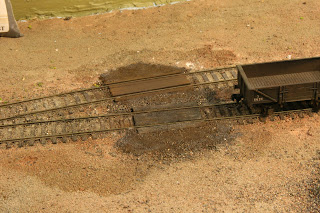 The installed crossing compared to its predecessor. 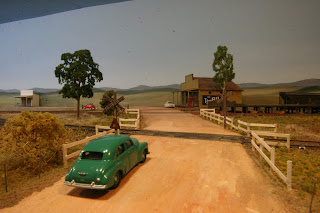 Here's one of the "main street" of Breeza on the Creek - because I could !
Posted by Gary Laker at 18:18