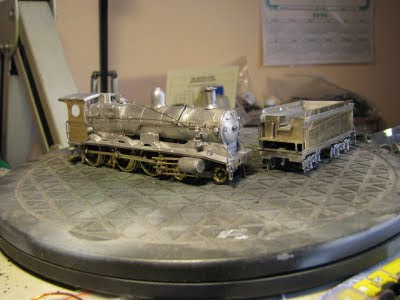 Following on from the "marker light" post I actually got in a bit of work shop time today and fitted the marker lights and associated electrical conduit/junction box in 0.4 mm brass wire, the boiler handrail/smoke box brackets and the cab roof. The hand rail is formed from a single length of 0.5 wire and takes about 1/2 an hour of judicious bending to get it right. I actually got the bends in the right places the first time which is unusual - for me.

I also had a go at filing the marker light handles a bit smaller to get them in scale, but you would never notice!

The head light is in the milling shop getting bored out to accept a yellow gold LED from Gwydir Valley Models and should pretty much be the last visible part to go on. Uncharted territory from now on so it should be interesting. Any tips from anyone who has done this before would be much appreciated! The front buffers and coupling, painted separately, will come later after the buffer beam is painted red, this makes a huge difference to the appearance of this area on the finished product. 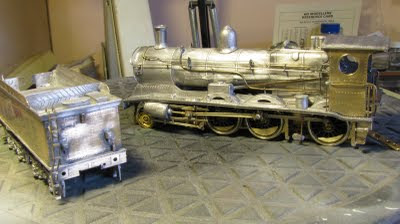 The whole loco was looking a bit ordinary as I had given it an overnight bath in white vinegar to arrest the corrosion being caused by the soldering process/flux. Using white vinegar neutralises the flux but leaves an inert, dark, kacky (?) film on the surface of the metals, so I have given it a clean up with a fibre glass burnishing brush (pen). These are and invaluable tool when working with white metal and brass and nothing else does a cleaning job like it. A spinning metal wire brush is, in my opinion, way to brutal when working with plug in detail parts. These are available from Casula Hobbies at Liverpool and Tom's Hobbies at West Ryde. Don't forget to buy some refills at the same time as they do a great job but don't last very long.
Posted by Gary Laker at 13:38