We usually have a few of them on life's journey (isn't that profound!?) Getting married, having kids, first house (and usually first mortgage), first car, first kiss, first time your kid's ignore you completely, etc, etc, you know what I'm talking about.

I had a sort of a milestone recently, I discovered that I'm the youngest member of our modeling 'group' ! I turn 47 in a bit over a week and I'll be honest, I never expected to be the youngest member of anything ever again! It was a pleasant surprise, mind you the two guys who I thought were younger than me definately look like they have a lot less k's on the the clock!

I had another genuine milestone a few days ago, I submitted a DA to council for my first shed! A backyard haven, a retreat, a colourbond cave, manland (apparently-not real sure about the conclusions one could draw from referring to it as "manland"), what ever you call it, it's 48.75 sqm (7.5M x 6.5M) of space to build a layout in. Now unlike council who said "about 6 weeks" when I enquired how long should it take to be approved, just after asking me for $670 in lodgement fees, my good wife approved this after the first request with the only condition being that some of the 'under layout' space be used for general storage of stuff. I can live with that!

So now the saga starts. I don't imagine this will go smoothly, I live in a "bush fire prone area" which generated about another 5 pages of paperwork and want to build pretty well on the boundary because I have a small back yard. It's going to be interesting. I will keep you posted. 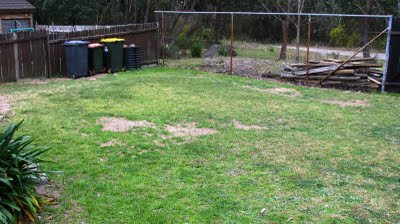 Future site of the Colourbond Cave !
Posted by Gary Laker at 20:28