The Meccano set I never had.

No I haven't left the country but I did leave the state for a while. Not long back from nearly 3 weeks away touring Gippsland and southern Victoria. Caught up with friends and was able to get to the Healsville Railway Festival, a mix of model and 12" to the foot railways held during the Vic Labour Day long weekend.

As you can see from the pics I have struck a blow on the "cave" project. Two fairly full on days work (one started at 7.30!, most out of character!) with a pretty impressive result, if I don't say so myself!

Big thanks to Layne, who actually volunteered with no coercion whatsoever, definately would not have got this far without his help. 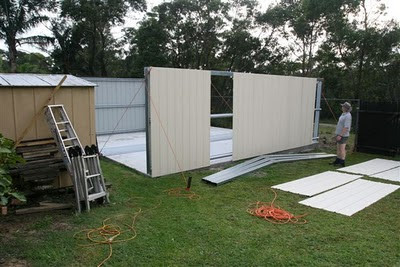 The wall frames I assembled and clad the day before on the slab. The gap is for the entry door which is cut in last. Chief Contruction Engineer Hardie can be seen here admiring our handy work. The walls, at this point, are supported by nothing else other than the orange ropes! Before you even think it....no, we did not drop them. Everything, to this point, went disturbingly to plan!? You can see the assembled rafters on the ground, next step. 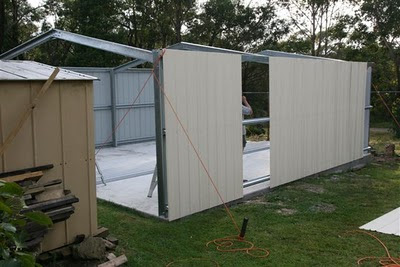 Rafters in place, ropes remaining, just in case. These gave us the most grief of the whole job. Getting them at the same angle and the same height was frustrating and time consuming. The first attempt resulted in an 80mm difference from one end to the other. Not long after this stage my neighbor stuck his head over the fence and said "Starting the benchwork tomorrow ??" 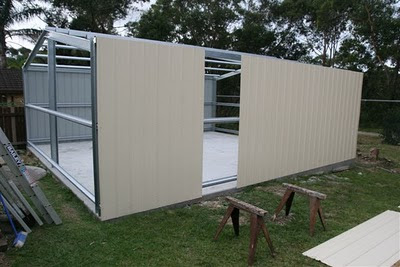 Around 5.30 in the afternoon this was where we left it! Cladding the end walls next, then the roof insulation goes in with the roofing to follow. Resting tomorrow for sure. 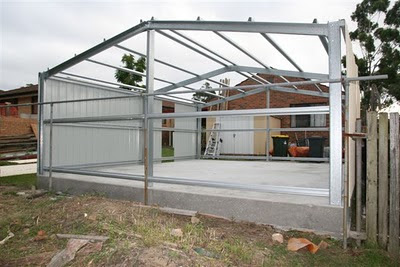 From the other side. The pipe work in the fore ground is the remnants of the fence, which proved quite handy to lean on.
Posted by Gary Laker at 22:59